Keri Shull in Forbes Magazine: “No” Will Never Stop Me

“NO” WILL NEVER STOP ME

1A negative used to express dissent, denial, or refusal, as in response to a question or request 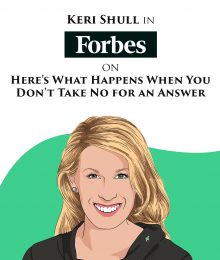 I’ve been told “no” more times than I can count. It’s crushed me at times, but I’ve never let it keep me from accomplishing my goals, nor will it ever dissuade me from reaching future goals and furthering the empire I’ve created. Having people tell me “no” only ignites the fire inside of me to succeed at whatever it is that I am trying to accomplish. “No” is temporary, especially when you take the time to reflect on why you’re being told no and understand the perspective of the person telling you no. Without facing the obstacles I’ve faced in the past, I wouldn’t own The Keri Shull Team and Hyperfast Agent, which I’ve built into a multi-million dollar empire.

I’m so grateful to be featured in Forbes with some of the biggest heavy hitters in the industry.

Thank you to the Oracles for being such an amazing group to work with and putting this article together.

With the right mental attitude, nothing can ever stop you from achieving your goals.

Italian in the Air Tonight

Make a Splash, Have a Drink, and Celebrate Amazing Growth &#…

Oops! We could not locate your form.